Flavour of the Week - Menthol Melon by Riot Squad E-Liquid

Today’s Flavour of the Week is courtesy of Riot Squad E-Liquid, who are a British e-liquid manufacturer that have been making huge waves in the vaping industry in recent years. Despite only being founded in 2016, Riot Squad have managed to catapult themselves to the pinnacle of the vaping world due to their delicious e-liquid and their unique branding.

Riot Squad’s branding has without a doubt given them a huge helping hand towards their success. Their packaging, which takes a military style theme is easily recognisable and helps set the British brand apart from their competitors. Riot Squad stated in their mission statement that they planned to ‘secure mass disruption’ of the vaping industry and it’s fair to say that they’ve done just that.

The latest range of e-liquid that Riot Squad released is their ‘100% Menthol Range’, which features five icy shortfills each with their own unique taste. Due to the recent ban of menthol cigarettes in the UK, a lot of vaping brands have launched new menthol ranges to help persuade smokers to make the change to vaping.

Riot Squad’s 100% Menthol has received a warm reception from the vaping community since its introduction in June. One of the stand out flavours within this range and our Flavour of the Week this week, is Menthol Melon.

Menthol Melon is without a doubt one of the best tasting menthol flavours available on the market at the moment. This fresh flavour perfectly mixes fruity elements with a blast of frozen ice. Menthol Melon features an irresistible blend of juicy honeydew melon and ripe blackcurrants topped off by an icy blast of fresh menthol.

It’s fair to say that Riot Squad have managed to create a magnificent menthol flavour once again with this outrageously refreshing e-liquid. Menthol Melon is a delightfully revitalising flavour that will leave your taste-buds totally satisfied.

If you happen to be looking for a new menthol flavour to try, then Menthol Melon may be the one for you. Riot Squad tend to be spot on when it comes to releasing new flavours and Menthol Melon is no outlier. To check it out in our store, scroll down the the ‘Related Products’ section of this page. 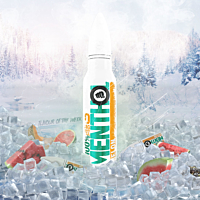